Reclusive kingdom located between India and China has asked for advice on preserving masterworks from the 16th-19th centuries
Dalya Alberge
Courtesy: The Observer (http://observer.guardian.co.uk/) 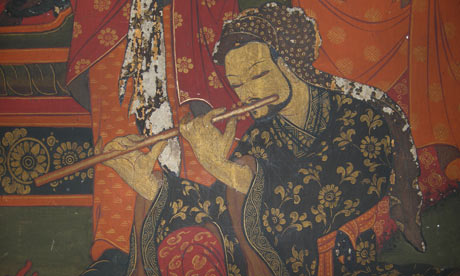 A 17th-century paintings of the Lama Lhakhang in Trongsa dzong.

British art experts have been given unique access to the hidden heritage of the Himalayan kingdom of Bhutan, including spectacular 16th- to 19th- century wall paintings from its 2,000 temples and monasteries.

Specialists from the Courtauld Institute have been amazed by the exquisite quality and technical sophistication of paintings that were largely unknown and unrecorded in the west. Professor David Park, from the Courtauld, said: “The wall paintings are absolutely stunning. Some of the earlier examples, especially, are extraordinary.”

His colleague, Stephen Rickerby, said: “We were astonished by the rich, jewel-like quality of some of the paintings in such remote settings. It was quite unexpected.” He described their technique as unrivalled in the west and spoke of being overawed by the miniaturist detail, achieved through a unique layering of colours and coatings. The subtlety and sophistication of facial expressions and flowers were “staggering”. Despite their intricacy, some of the paintings are huge, extending across hundreds of square metres.

Bhutan, a kingdom of 700,000 people with a Tibetan Buddhist heritage, is one of the world’s most insular countries. Its temples and monasteries are in rugged mountain terrain where, in some areas, horses, mules and yaks are the most common modes of transport. One hermitage is perched 3,400m up a mountain and is so inaccessible that even mules cannot reach it. Rickerby climbed for two hours to reach it. Once in the hermitage, he was taken aback by the early 18th-century paintings on its inner walls.

Access to the sites was granted as part of a three-year research collaboration between the Courtauld and the Bhutan department of culture, through funding from an anonymous US benefactor. The last stage of fieldwork and scientific analysis has just ended.

The project marks a further stage in opening up Bhutan, which was almost completely cut off from the rest of the world for centuries. The kingdom, landlocked between India and China and which calls itself the Land of the Thunder Dragon, started to allow tourism only in the 1970s. Even today few westerners know the country. Trekking is not allowed in the sacred mountains, where the country’s former king, Jigme Singye Wangchuck, decreed that “gross national happiness” was more important than the economic advancement of its inhabitants.

The spectacular paintings seen by the British experts decorate the walls of 17th-century temples in dzongs, or Tibetan-style fortresses, the most important of which includes the Tamshing Monastery.

Its wall paintings are among the earliest in Bhutan, and are intimately associated with one of the most revered figures in Bhutanese Buddhism, the saint Pema Lingpa. The paintings can be dated precisely to his time at Tamshing, between 1501 and 1506, and they include his portrait. “The paintings are immensely important,” said Rickerby.

Another site boasting a rich selection of paintings is the Tango Monastery, dedicated to Tenzin Rabgye, a 17th-century spiritual ruler and poet whose personal chamber was painted with rich pigments and gold by the finest artists, probably of Tibetan, Newari (people from the Kathmandu valley) and Bhutanese origin. A long-held oral tradition records that the figures in the paintings cried when Tenzin Rabgye died.

Although the paintings are largely sacred in subject and are restricted to religious worship, the Bhutanese have looked to the Courtauld’s expertise to ensure the paintings’ preservation for posterity. Some of the buildings in which they have survived have been damaged over the centuries by fires and floods. In a harsh natural environment, gradual deterioration takes its toll on the susceptible materials that constitute the paintings.

The Courtauld study will lead to an understanding of how the art deteriorates and how it can be preserved. “An alarming number of Buddhist wall paintings in India and Tibet have been irreversibly damaged by well-meaning but disastrous cleaning,” said Rickerby. “Bhutan’s isolationist past protected its cultural heritage from such dangers, but the opening up of the country means that such risks cannot now be ignored.”

He and a colleague will publish a report next year as a benchmark for the future study and conservation. Until now, no one had a clear idea of how many paintings existed, let alone their condition, date or significance. Rickerby said: “Their significance and quality deserve far wider recognition.”