The country knows it needs to develop, but it’s making sure the development doesn’t come at the expense of its natural resources.

“My country is not one big monastery populated with happy monks.”

That’s the first thing that Tshering Tobgay, the charismatic prime minister of the tiny Himalayan nation of Bhutan, wants you to know about his homeland.

People are forgiven for thinking otherwise. For its beautiful forests and mountains and ancient Buddhist architecture, Bhutan—a poor, isolated country sandwiched between India and China that famously measures Gross National Happiness as its main economic indicator—has been called the last Shangri-la. But the prime minister knows that perception works against Bhutan’s efforts to develop economically along a truly sustainable path that has eluded many other equally beautiful nations. In Bhutan, many people still live in poverty, youth unemployment is rising, and pressures on forests are increasing. Its total GDP, $2 billion, is half that of Springfield, Ohio. END_OF_DOCUMENT_TOKEN_TO_BE_REPLACED

Deep in the Himalayas, on the border between China and India, lies the Kingdom of Bhutan, which has pledged to remain carbon neutral for all time. In this illuminating talk, Bhutan’s Prime Minister Tshering Tobgay shares his country’s mission to put happiness before economic growth and set a world standard for environmental preservation.

It’s graduation season, and for the past two months I’ve been traveling to campuses in the United States on a book tour to talk about service in the Marines and social entrepreneurship in Africa. One point seems to resonate with students above all of the others. From a commuter college in the plains of Indiana to Stanford and MIT, students have been latching onto one simple sentence: be a doer. 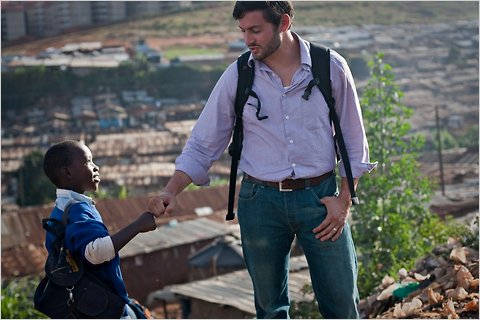 Jason ArthursRye Barcott, co-founder of the organization Carolina for Kibera and author of “It Happened on the Way to War,” exchanges a “gota,” or fist bump, with a young member of his organization. END_OF_DOCUMENT_TOKEN_TO_BE_REPLACED